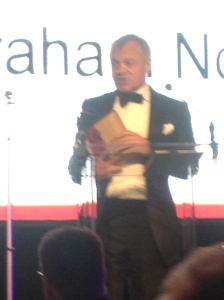 Gay celebrities and their ‘straight allies’ were recognised for their commitment to equality after a vote by readers of the popular gay magazines.

Joey Barton, who has campaigned to eradicate homophobia from football, was a surprise winner on the night. He beat off tough competition from rugby legend and Strictly Come Dancing star Ben Cohen, breakfast TV presenter Lorraine Kelly and Ab Fab star Jennifer Saunders for the honour. Barton attend the awards with his openly gay uncle, Tom Barton.